Its been 5 weeks since my ablation with Dr.Natale in Austin. And my heart has been quite since my Cardioversion 2 weeks ago. No PAC's, PVC's, Eptopics or any other type of arrhythmia. To say I am happy about that is an understatement and I hope that it continues. There are still a couple months to go in the blanking period.

Of course I am still dealing with the Sciatic Nerve pain from my L4-L5 disc bulge. I've been to the ER twice over the past couple weeks with it as doctors have seemed to just leave me hanging with no way to alleviate pain. However, I have had the bulged disc confirmed by an MRI ordered by the ER doc. I also spoke with a Surgeon about it who wants to wait to see if the disc heals itself. So in the mean time he has ordered a nerve block for me. But as per usual that was Wednesday and today is Saturday and as of right now I wont be getting a nerve block until September 5th.

So here I sit in pain with no immediate relief in sight. I really thought that when I left his office on Wednesday he had a full understanding of my situation. Lots of pain and recent heart surgery that I am still recovering from that requires me to have little stress. So much for that I guess. Between me and the surgeons office we have contacted every pain clinic there is and nobody can beat the September 5th date as of yet.

I did have a glitter of hope Friday though. My wife actually knows someone that works in a pain clinic not to awful far away. Its actually one that I had already contacted that said they really could not help me. But is seams that maybe they can. The do what they call direct inject. this means that my doctor refers me and I go get the shot that day or within a day or two. So I called the surgeons office again and implored them to contact this particular clinic and get the ball rolling. Which they did. I also asked if they could give me something for the pain to bridge me to the time of the injection which they also offered to do. She said that they would get me some percoset. So i was a little be more optimistic at this point.

After talking with them I headed to the Chiropractor for some traction therapy. I do have the conversion table but it didn't seem to be helping and the traction uses intermittent pressure an actually seems to help. After my time on the Rack I started heading for the surgeons office to retrieve what I thought was going to be a pain med that might help me. Unfortunately it isn't. Just more of what they gave me at the ER that doesn't even take the edge off.

The Bright side, or at least I thought, was I got a call from the pain clinic. They had received the referral from my surgeon and only needed some paperwork from my Dr. in Texas which I had already started the ball rolling on a couple days before. She got all my information and what she needed from Texas and promised she would touch base with me before the end of the day.Which she didn't.
Another Rant By Affib Rider at 9:07 AM No comments:

Last week was a cluster healthwise. Of course my sciatic nerve pain is through the roof right now and I was running allot of PAC's and PVC's. I went out of rhythm Tuesday morning for a bit but converted back. Then I went to the hospital Tuesday evening to see if they could do some tests to figure out if my sciatica was being caused by a disc or some other ailment. They did some exray's and a CTA scan to rule out any clots in my leg. Everything came back normal so I still don't know 100% what's going on. Pretty sure its a bulged disc though so I'll have to wait it out.

I had sent Dr Natales office some recordings on Wednesday morning as I had gone back out of rhythm and they called and asked if I could arrange to get cardioverted within next week. I called my local EP and they scheduled me for last Friday morning. I worked Thursday night so  headed for the hospital straight from work Friday morning.

If you have been keeping up you already know that my I have
already had one cardioversion done this year back in April. You will also know that the worst part of any EP experience for me has been the TEE. I was however curious as to how this one would go. My Cardiologist retired last month so I knew that he would not be doing the procedure. Which,, even though I hold the man in high regard his TEE skills pretty much suck.

So I arrived at the hospital early and got all the pre cardioversion stuff done which basically consist of a chest x-ray and getting an IV so they can inject the propofol for sedation. They hooked me up to a monitor then decided to wait on my EP to some in and verify that I really needed a cardioversion. He came in not too long after to talk to me about what was currently going on and to also catch up on the festivities in Texas. I handed him a copy of the ablation report and he quickly took it out and looked it over. He was very pleased to find all his work was solid, as I was always confident that it was. We then talked about the cardioversion and some small talk. He said that I was in a controlled flutter and that they would be doing a TEE then cardioverting me.

It was a while before they came to get me so I was just laying there trying to catch a nap but I kept hearing this music, Kool and The Gang to be specific. I originally thought that one of the other patients in the holding areas family members was playing music but I would eventually find out it wasn't them and where the music was actually coming from.

Eventually a couple of transport girls came to get me to take me to the EP lab. I stepped from my bed to the transport table then they wheeled me out into the hall. As we approached the hall the music got louder and the girls started to dance. There was a doctor sitting right outside the room and Celebrate must have been the music his computer played when he opened his computer. What a light hearted fun moment that was. Always a great experience at UPMC.

I eventually ended up at the EP lab where I met Karl. A very animated prep guy. He made me laugh several times. Then the nurse anesthetist came on and we started talking. Now if you have never had a cardioversion before there are allot of folks involved. You have of course the EP, a cardiologist, nurse anesthetist and of course and anesthesiologist. So rangeling them all together can be a task as stated by the cardiologist that soon entered the room.

She was very friendly and animated. She introduced herself and we talked for a while. I had told her about my many experiences with TEE's, good and bad and we laughed. Finally everyone showed up, I signed a couple more forms, then off to lala land/ I never even knew that she dd the TEE. The cardioversion went well. it only took one jolt to convert me back into rhythm and I have been there ever since. Hopefully that will be it for forever. So far as weather or not I am concerned about the success of my ablation, I'm not. I am just over 3 weeks in at this point so the heart is still healing. The fact that I went into flutter does not concern me either as it was probably all the PAC's and PVC's that put me there. I also realise that I may need a touchup procedure as Dr. Natale addressed some issues that hadn't been addressed before.
Another Rant By Affib Rider at 10:01 AM No comments:

Received my KARDIA device last week. I really like new gadgets especially useful ones. The Kardia actually give me real time ECG monitoring that I can carry in my pocket. And for those of you that are Apple sheep there is the band for the apple watch that the same thing 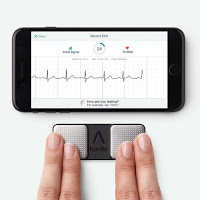 After reviewing the strips I have taken I am pretty sure the low heart rate I thought I was experiencing in an earlier post were PAC's and PVC's instead of some low rate arrhythmia.
Another Rant By Affib Rider at 12:55 PM No comments: