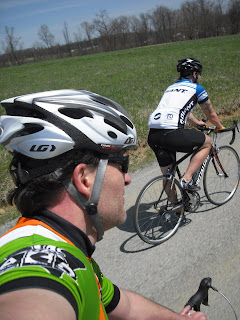 So "The Disenchanted One" and I headed out into Armstrong County again yesterday morning. We went out through Conemaugh into Saltsburg, then across 286 to 380. Took 380 back to 819 then into Apollo. Back out Sugar Hollow then across to King Road then out towards Maysville to Edmon. Cut back through Saltsburg to Parkwood then back home. 82 miles with over 5300 feet of climbing for the whole ride, though I must say it felt like much more climbing than that. My legs were really fried form the weeks Vo2 max testing and the other 2.5 hours of testing Monkeyboy put me through, but pushing through the pain is good.
We were supposed to meet up with a couple of other guys in Apollo but we ran into "Scrawny White Pale Guy" just outside of Salstburg and chatted for a while thus throwing our schedule off but I that's OK I haven't seen Dirty mike in a while. He had just finished up a 13 mile run...I guess he isn't having enough knee pain these days. Before we dismissed ourselves he handed off a cliff bar that I later gave to Steve...Thanks mike. 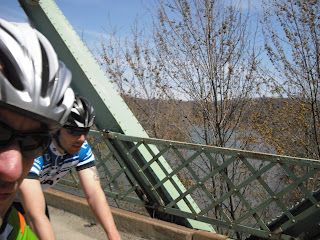 So in the end we ended up finishing at a brisker pace than last weeks climb fest so I guess that means that our off season ,off the bike, on the couch, feeding frenzy type training has paid dividends...NOT. Anyway will probably do a long ride next Sunday as I am meeting Brownie and some of the other team members at the oval in Pittsburgh for some TT training.

So one of our team members has a propensity to find and retrieve many numerous and sometimes odd things along his training routes. everything from water bottles to a full on pair of cover-alls. So look out beachcomber there is a new kid 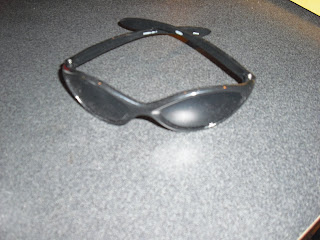 That's right my son found these and they are kids glasses to boot. Now if I can only get him to find his own bikes that would be great.

Well I'm of to hit the spinner for a recovery ride.
Another Rant By Affib Rider at 8:31 PM