On my current state is that I was to the Eloctrophysiologist last week and after a lengthy discussion I am on the path to Ablation. Finally after 17 years of this troublesome little pain in my life it may finally be coming to an end. Of course over those 17 years I have been able to compete and even place pretty well in allot of the races I participated in. But as many close to me know that has not been the case as of late. My ablation will be scheduled for early August.

It's Killing Me Though..........
Not being able to ride now for almost 3 weeks. It's amazing how you can feel your fitness starting to slip away. Now its not super dramatic as I have been cycling and racing for well over a decade now but I can feel the difference just the same. Once I have the Ablation it will probably be another 3 to 6 months before I will be able to get back to serious training...or at least as serious as a guy with a family can. A good friend of mine has come to the same realization as of late that you cant be supper competitive, hold down a full time job and spend allot of quality time with your family. If you think that you can then you are sadly mistaken my friends. I remember once on a long ride with some friends somebody asking a fellow rider how he kept in such good shape with a wife and kids at home? His response was, "Well, I just don't go home after work". That left a lasting impression on me, as I am pretty sure it did on everybody else that was listening in on the conversation as well. I could see it in their faces.

At The Races........
This weekend. Not racing but Marshaling. Our team was sponsoring a race just outside of Butler this weekend, Renfrews Ras, so as I am unable to participate I thought that I would go help out. Now I have been to many races over the years, and I hope that this does not sound biased, but this was probably one of the best organized race events I have seen in a while. There are no better races than those organized and supported by cyclists in my opinion. Not only that but having the organizer be as detail oriented as Henry is, then its bound to be good. It was also good to see a majority of our team show up to help out as well. Ag3r colors were flying everywhere, both on and off the course.
Not only was every category of race touched on, (Cat 4-5, Woman's Category, 40+ and Elite), they had a Citizens Race as well. There was great support, at least 3 people at every corner, motorcycle, Fire Dept, Police and neutral support vehicles for each race. On top of that the course and prizes were great as well. These are the kinds of things as a racer that you look for when deciding if you will ever return to the race in the future.

A Brief Photo Montage........
Its never to early to get you kids involved in all aspects of athletics. We really had a good time. 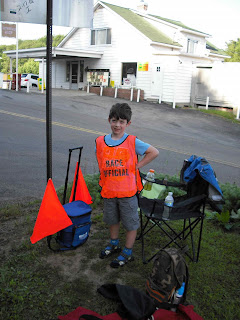 Great races have great race coordinators. Here is our race director extraordinaire. Thanks to Henry for putting forth such an effort to promote such a great race. 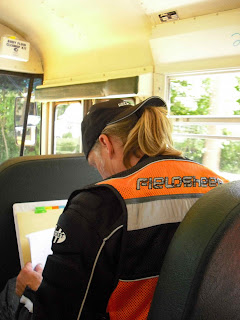 There is a story behind this one. This guy dropped his chain and frantically tried to put it back on by using his front derailleur. Having no success with that he jumped off the bike and started trying the same technique while holding the bike up off the ground. Still with no luck he requested assistance, "Hey, can I get a hand here?", in a smart-assed tone. I thought "Your chain is off idiot, its not like your having a heart attack or something. 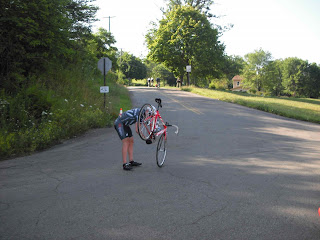 Of course he wanted somebody to hold his bike in the air while he continued to try to put his chain back on by using his front derailleur ("What an Idiot"). So one of my Fire Station volunteers obliged him. I was kind of enjoying the show but the bike mechanic in me could not stand to watch any longer. SO I walked over, pushed his hand away from his crank, Grabbed his chain and put it back on for him, all in one simple motion, in all of about 5 seconds. He looks at me as if I have just performed some sort of miracle, said thanks and was on his way........."IDIOT"

This is my buddy Luke. Not the guy above but the guy below./ Anyway Luke is finding that having a family and a successful cycling career is near impossible...at least for us mere mortals. Anyway I think I heard him saying something about a bowling league. 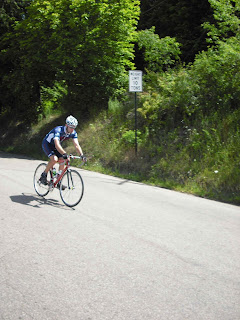 Last but not least is "Poser". Leading the ladies race claimed that he had the king of the mountains points pretty much wrapped up. 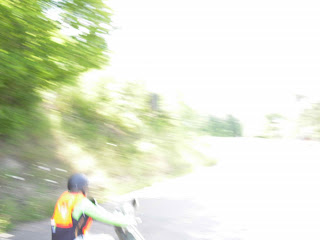 Another Rant By Affib Rider at 7:26 AM