And stream crossing with water almost up to your chest. Now that's the way to put on a Mountain Bike Race......
So after many years of conflicting events, work and who knows what else, I finally had the opportunity to participate in the "Dash For Cash Mountain Bike Race". All I can say is if you have never done this one you are really missing out. Doug Crytzer is race promoter and as an avid mountain biker and adventure racer he knows what it takes to layout a challenging and fun course.
Everybody had a really good time and I got to talk to a bunch of people that I have not seen in a couple of years as I have not been racing due to my former heart problems.
The race itself was a blast
The race is set up in a time trial format, riders leaving in pairs in 60 sec. intervals. Which is pretty cool as it really eliminates any real congestion on the trails. There are three different categories. Beginner (5 miles), Sport (14.4 miles) and Expert (19.4 miles). I did the Sport as I haven' raced in a couple of years and I have not been on the MTB for quite some time so I figured my skills were going to be pretty rusty. I also had heard allot about this course beforehand and figured to do the 14.4 miles was going to be a pretty good challenge and I was not disappointing. Lots of great single track, sketchy descents and enough rocks, roots and logs to keep you busy and on your back. I started with a fellow teammate, Richy, without a warm-up. Neither of us were sure if this was a good idea but what the heck. I let Richy get in front and set the pace and just sat on his wheel. It has been several years since I have done any type of racing so I figured this would be a good way to start. Richy had done this race in the past, and has been mountain bike allot this year so I figured I would just follow his lines for as long as I could.
We were rolling along pretty good, passing some p[people that had started before us, and I cant remember how it happened but all of a sudden Richy was on my wheel. I was feeling much better than I though I would and just set a steady pace. My goal for the race was to try to keep my heart rate in the 165-175 range, as I still have not relined myself to this point.I looked at my HRM, 170bpm, Right where I wanted to be. So we kept rolling along. This first part of the course wasn't the most technical part of the course but it did have its share of rocks, roots and mud, and was pretty slimy. All of a sudden we come into this section with a bunch of rocks and I find my self on my back. As I got up Richy rode by. I got back on rode a short distance and back on my back. This happened one more time as I was approaching Richy's wheel and I never did get back on.
I decided at this point my technical skills were waning and that I should just set a good rhythm and forget about trying to catch Richy's wheel again. So I settled in and just kept pounding. We eventually came to the first Hair raising decent and I decided to just sit back and hang on. As I was descending I saw several riders walking their bikes. I even caught a glance of Richy again and probably would have caught him but as I approached one of the other riders there was not enough room for me to get by , got hung up , and had to dismount. I got past him and down the rest of the way to the first water crossing and saw Richy just getting out of the water. This was first and worst water crossing of the day. It had rained allot leading up to race day and water levels  were still rising. They had heavy cables stretched across the stream to hold onto so I grabbed hold of one and jumped in. Unfortunately I was on the downstream side of the cable and should have been on the upstream side. So when I got to the other side I had to maneuver myself and my bike under the cables before I could get out of the water. 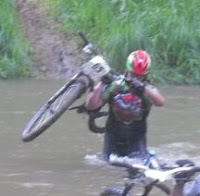 Once out of the water, and started to remount my bike, I came to the realization that I probably should start thinking about a new pair of mountain bike shoes. The fast current had undone the Velcro Straps, so I had to take a moment to reattach everything. This happened a couple more times during some of the other water crossings as well. So back on the saddle and into my rhythm. As I started back my legs felt like anchors, this happened after every water crossing that we had to dismount for. It must have been due to the current and the colder temperatures of the water.


Old Friends.....
So after the race and post race festivities, which included roasted pork, beef and all the fixings, with good live entertainment in the background. I headed towards home to catch up with some High School classmates. They had decided to have a picnic and hit a local watering hole later that evening. Unfortunately the turnout was small due to the weather and my time I had to spend at the bar was limited. It was however good to see everybody that was there and hopefully the next time more folks will show up.
Another Rant By Affib Rider at 12:36 PM