What do these two things have in common you might ask. Nothing other than the fact that they have both been competing for my time the past few days.

Riding has been easy....
Robots, not so much. I am not sure if it is the weather, or a culmination of the miles ridden this year but I am feeling really good these days. Still don't have any races on tap for thsi year, and of course scheduling conflicts are eliminating any chances of me doing a sure to be fun event this Friday evening. I am hoping that next year will be better for me so far as being able to do more events. Our schedule should ease up a bit once my wife finishes up her degree in the spring.
About the Robot......
There is nothing more  powerful than the imagination of a young child, and as they grow so goes the aforementioned. Their thought process, though young, hasn't the boundaries of experience and to them anything is possible. I believe that this is what sets the truly innovative apart form the rest of the herd. Somehow they are able to detract their minds from these experiences allowing their minds to perceive things differently than the rest. And far be it from me or any other adult to squash said imaginations. So when my 7 year old son came home the other day and told me that his project for this Friday was for him to come up with an invention, and make a poster describing it, I say that will be easy. But of course nothing is how it seams, and  he not only wants to make the poster, but he also wants a functioning robot. So as his excitement exudes during his description of said robot to me, how could I possibly say no.
Now I don't know how things operate in your home but for whatever reason my family has become spoiled. Not so much in the monetary or  possession sense, my last name is not Rockefeller, but in the knowledge that they can count on me to come through for them in a pinch and even at times ,when I might fall short, they know that I have given 200% effort for their cause. So a functioning robot, form stuff we have just lying around the house, in 1/12 evenings........"Sure son, we can do that." Son's response "COOL!!!"
So during this whole tirade of excitement, my mind is racing through a plethora of ideas, often times being derailed by another thought or idea fired off by my son as to what he wants his robot to do. Fortunately for me his ideas aren't written in stone and he is quite content for some of his functional ideas to be put on hold as this is only a prototype project. I wonder if he really understood what that word  prototype meant when I threw it out at him. Just in case, I explained to him that time constraints would probably only allow for a moving robot with blinking lights. Blinking lights was something he had not thought of and all other ideas went by the wayside. Which was good for me as I really don't have time for functioning arms and hands. I was also able to convince him to use the Halloween costume I had made him a couple of years ago as the body for the robot, which was easily done. 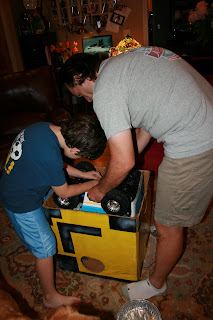 So the project got completed on time, and do to time constraints I was unable to have it do everything I wanted it to but the boy seems to be happy so all is good.

Another Rant By Affib Rider at 7:54 AM

I went up to eat lunch with him today and he had his unveiling afterwords. He was all atwitter and so was his class.

I had an Afib episode last week and I'm terrified. Mostly, I'm afraid of losing the things that I truly love in life--my girlfriend, skiing, biking, and hiking. Seeing people like yourself that have managed with the condition is inspiring. If you have time, you could message me at nickaceto(at)gmail.com

Thanks for the inspiration!

I had an Afib episode for the first time last week. I'm 29, active, dont drink or smoke and terrified of this thing taking away the things I love most in this life--skiing, biking, hiking and of course my relationships. It looks like youre doing just fine. If you have time I'd love to hear from you at nickaceto(at)gmail.com