Nothing New To Report

So its the same ole same ole with the battle between my arrhythmia and the Tikosyn. Tikosyn still has the advantage but not enough to satisfy my psyche. Of course the arrhythmia has an accomplice this week in the form of sciatica. 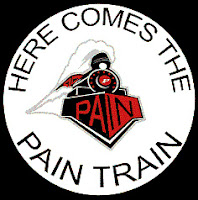 Now if you have never had sciatic nerve issues or God forbid your
Satorius Muscle cramp up on you on you 70 miles into a century ride, consider yourself lucky.I will add here that the Satorius Muscle cramp wins hands down in medieval torture fashion. At least with the sciatic nerve you can remain still and have the pain recede. The Satorius Muscle however, will toy with you. As you try to find relief by bending your leg it will pull tighter. If you try to stretch it pulls even tighter. It will leave you writhing on the ground wishing for death if you let it. My best advice is to keep pedaling in a smaller gear at at higher cadence. It will right itself pretty quickly.

Anyway, it became quite clear a couple days ago that I was going to be on a sciatic nerve pain train that was too late to try to derail. There are many exercises you can do to keep this from happening and or help alleviate it before it reaches the point that mine did. A pain that I hope reached its crescendo yesterday.

I was sitting on the deck last night with my wife. it was getting late and she decided to go to bed. I told her I would be along soon. About 20 minutes passed and I decided to get up. No go. I shifted around and tried again. No go with some added whimpering. So I picked up my cell and called my wife....no answer. So I called my son and asked hie to send her outside. She soon arrived to find me where she left me. She tried several times to assist me from my perch to no avail. We finally decided to try the heating pad as that had given me some relief earlier in the day. 30 minutes later I got enough relief to escape the grasp the chair had on me.

The night was no better as any bit of relief I got either from ice or heat was short lived so 3 hours sleep was all I got last night. Then when it was time to get up it took about an hour for me to get out of bed. I had an appointment with my cardiologist for an echo this morning so I had no choice but to suck it up and carry on. I did get in to see my GP this afternoon and he prescribed me some muscle relaxers and steroids and said I should be right as rain, or at least more human like come Saturday. He also said he is seeing sciatica and nerve pain in other patients that are taking Tikosyn. He promised it would go away.

The Echocardiogram went really well and no issues were immediately found. My Cardiologist said if he did find anything he would call me in a day or two and if I don't here from him then all is well. He did say that the weakness they saw on the TEE before my cardioversion was no longer present so that is good. Once he has completed his report he will send it off to Texas as this was the last piece of information that Dr. Natale requested.
Another Rant By Affib Rider at 8:55 PM