Haven t been posting much lately. Been busy with work and such. Haven't been riding too much either. I have only ridden twice in the past two weeks. I rode this past Sunday and the Sunday before adn that is it. Gabe and I rode to the park this afternoon so I guess I did do something on the bike.

I cant quite remember the previous Sundays ride but this past Sunday, Rich, Hammer, Matt, Andy, Botsford and Jason did the Bar Slope loop headed out Airport to Hoodschool then back to Airport to 286. Then into Clymer to 403 to Bar Slope the back home through Tanoma. I was really kind of looking foreword to a easy ride since I haven't been riding too much, but as usual it wa not long before things got in a hurry. Riding with these guys is real similar to racing except that instead of having a big group of guys to hide behind when you don't feel good there are usually only 4 at best and if you lose contact your sunk.

So it was your usuall reindeer games and such and I survived to win a couple of township line sprints. The heart is behaving pretty well these days adn I am happy for that.

Brownie, and Dirty Mike did Iron Cross VI this past weekend and I wish I could have been thee but was not able to make it this year. Brownie actually added to his suffering by doing Iron Cross light the day before. For those of you that aren't familiar with Iron Cross, here is the skinny. Iron Cross is a 62 mile long Cyclocross Race (follow link for more description) where you ride a bike very similar to a road bike through the woods, fire roads and such. Mike flatted and Brian did it in just over 65 hours not quire beating his designated mark. This really surprises me because Brian is probably one of the most fit people I know. He actually placed 2nd overall in the PA State Time Trial Championships. He just does not do well in mass start races for some reason. Probably partly mental and partly a lack of specific training in short all out repeated efforts.

Well fall is here and so it is time to start thinking about archery season.......... I haven't done a whole lot of hunting the past few years and really hope to be able to get out a little bit more this year. it is things like this that keep me interested....... 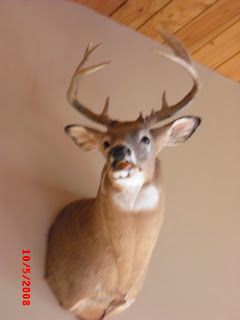 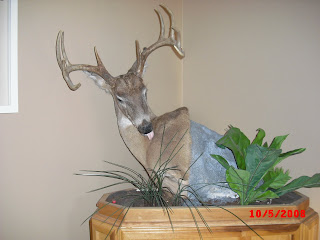 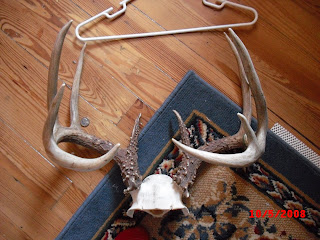 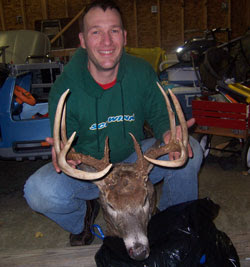 All score 126 or better, the first I hunted for 3 years , missing him once and finally shooting him right under my tree stand on October 31, 1998 the other two I could not wait and when we crossed paths in rifle season I could not pass them up. I had a buddy that totally focused on archery and let a lot of bucks pass in rifle season. He later in life regretted doing that so I decided not to follow in his footsteps....

Well the Dow dropped again today......I must say that at this point I am unaffected, since as most people I know, I don't have enough money invested to be concerned and definitely not enough in the bank to not be covered by the FDIC. Shoot most of the people I know have less money on hand than they spent on their bikes........ I hope that things turn soon, but I really don't see that happening for another year at best.
Another Rant By Affib Rider at 6:34 PM