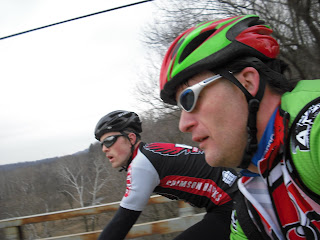 So Duane and I did the eastern shore loop this morning. You cant beat 56 deg at 8:00am this time of year and by the time we finished it was 66 Deg. His new Special Ed is pretty sweet and he got a great deal on it to boot. He wishes that it had better components but by the time he really gets sick of it it will be time for another bike. He probably will upgrade the wheels though. It came with Shimano...which aren't bad but Mavics would be sweeter.

So as we are riding along he mentions that he is going to try to get the Five Points road Classic back up and running. During the conversation he reminded me of an incident that happened back in 2001. Pap (the doper) had shown up alone and Hoovis' team kept attacking him. so at the end of the race something happened and Pap and Hoovis go fisticuffs. But probably was more like this.

So anyway I hate this time of year because I am totally out 0f shape.Too much hunting and work this past winter season. I hope I never do this again..it really stinks.
The running man.......... 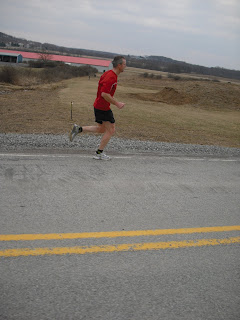 Ran into tom the other day while I was out on the bike. He was actually supposed to ride with us this morning, but I'm guessing he went earlier since it was so nice and they were calling for rain. Seeing tom made me think about how many good competitive cyclist we have here right in Indiana. We have Rodie's moutainbikers and adventure racers that have competed all over the world. I wonder what the average number of competitive cyclist you can expect to have based on your population.
Another Rant By Affib Rider at 10:56 AM

Lots of funny links and pics!