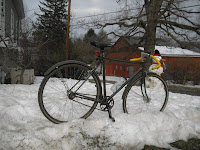 This past Saturday. It was my maiden voyage on the road since before my ablation. So I have not been out for a real ride since July. What a blast.!!!! I knew that I was missing it but did not realize how much. I took the fixed gear as it has fenders, and heavier tires as to prevent getting a flat tire. 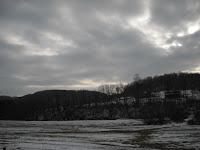 The roads around here this time of year are horrible and a heavy tire is highly recommended. A cyclocross bike would have been a good choice as well, but as I don’t have one of those in my arsenal at this point the fixie did fine. 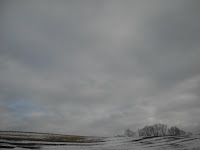 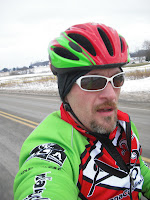 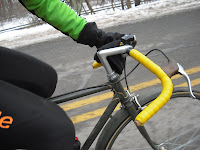 I  love riding the fixed gear. It is by far one of the best ways to get into shape. There are no gears so you can’t fake it. When the going gets tough you have to work or walk, and we all know walking is not an option. This will however probably be the only time I rid this particular bike for a while. It ahs only been 5 months since my ablation and I really don’t want to red line myself yet. I will get back to it though as the season progresses. Oh and I only forgot I was on a fixed gear once as I drifted off eh road but I managed not to hi the eject button. 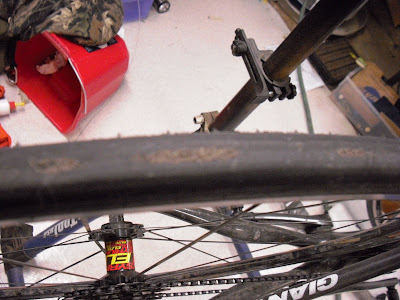 With Steve yesterday but as luck would have it I could not make it. I was not so disappointed at first as the weather and roads did not look so good around noon but a little later in the day the sun came out and the roads started to dry out. We are going to keep an eye on eh weather though and get out as soon and as much as we can. I will be spinning this week though and start teaching a class this Friday.
Heck, I even put a new tire on to replace this one for the outing. that's right folks there are plenty of threads showing here.

Pretty women anger more easily.” Researchers found women who rated themselves as pretty displayed a war-like streak when fighting battles to get their own way.” Now why can’t I think for this kind of stuff? I can only imagine that Researcher = $$$$$$$$$$$. “In the study, the women who believed they were good looking were more likely to respond angrily in disputes than those who rated themselves as less attractive. Now this isn’t rocket science and I am pretty sure that any red-blooded American man, or woman for that matter could have told you this. Just put a couple of pretty women in a room for a while and see what happens. Not necessarily what happens over at doucheblogcyling, sorry Burt, but I think you get the picture.

In a sense anyway. Just finished copying all of my personal blog posts from AG3r to this one. Check them out if you like they are all older (2005-2006) but so what.

I have been doing the facebook thing. It amazes me how some people have so many friends. Some people have more friends than I think I personally know. Although I think when you get right down to it most are probably just acquaintances.  Friend is a word that people tend to just throw out there, but the meaning of the word has no real significance to them. I wish I had a dollar for every time I heard somebody say “yah, they are a friend of mine”. Really?

Lets face it; we have many people come in and out of our lives over the years.  And just because you know somebody does not make them your friend. Now that may seam a little harsh but I believe it to be true. Friendship is something to be valued not used. Friendships can last a lifetime so you should choose your friends wisely, quality not quantity. And don’t confuse quality with stature or what that person may be able to do for you, because you will be left short when you really need a friend.

A friend will impact your life in a positive way. Now you may not realize this when you are young but as you grow you realize how the people you chose as friends when you were young probably had the greatest impact on your life. I came to this realization a few years ago when a childhood friend’s parent passed away. It was not only the friendship I had with this individual that impacted my life, but her entire family. They are all a part of who I am. And of course as we grow older we have the ability to be more dicerning about the friends we choose.
So be the best friend you can be, somebody might be counting on it.

Just what I need. One more thing to do. Something else to cut into my day. But I am still considering it. I have come up with a couple of ideas as to what I will focus on but still not sure if I will follow through. It will be of a less personal nature for sure. Nor am I sure if I will link it to any of my other Internet stuff.

Another Rant By Affib Rider at 7:06 PM