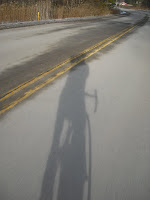 Ended up riding alone today. Was supposed to ride with Steve but he had made a trip to Pro Bikes in Pittsburgh and was not going to be back in time. So after changing the oil and washing the truck I headed out.

One thing I have noticed since my surgery is that I don't seem to get as cold as in the past. I assume it is due to the more efficient beating of my heart and makes me wonder how many times I may have been in  atrial flutter while riding.

I was unaware that I had this condition in addition to the Affib but I became more prominent during the weeks leading up to my surgery an I felt pretty normal except for the fact that my heart rate was around 150bmp for over a week straight.

Ended up doing a little over 30 miles today which took me around the Tanoma loop.

Of Tanoma, I had an interesting experience there to day. Now we spend allot of time riding this particular road over the years without much indecent. Considering the amount of time cyclists spend on this and other roads around here the couple of incidents that have been makes you feel pretty comfortable about riding there. A couple of dog vs bike accidents and the on evening Scooter had some guy chase him off the road with his pickup cornering him between the grill and a concrete building. I will never forget that night and fortunately there were about 8 of us there to witness the incident and quickly convinced the guy in the truck that he had made a huge mistake and that instead of getting out of the truck that he should probably stay put and the police were on their way.

I don't have a clue as to what sets people off in cars but it does happen. Most of the time is is a simple gesture indicating their IQ, other times it is a can or some projectile directed your way. And of course there is the occasional close shave or cut off.

It all started at the single lane bridge on the way from Tanoma, not nearly wide enough for 2 cars but just enough room for a car and bike to pass each other. So as I approach the middle of the bridge an  approaching car enters from the other end. Which I would have thought nothing of as she was moving slowly, except for the fact that she was edging her way towards my side of the road. Actually she left as little room as she could for me to get by and probably would have left less if the distance between us closed quickly. So as I slowed to a creep past her I glanced her way and she calls me a j@c%@$$. Now she is so close top me and the road is covered with anti skid material I actually placed my had on eh corner of the rear of her car as I exited the bridge. 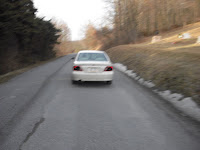 So I continued on my way and never gave it another thought. That is until about 1/2 mile down the road I hear a car racing up behind me, but I did not bother to look as cars always do that. Next thing I know this crazy old woman comes up along side me and towards me cutting me off then slowing down to a crawl. As a moving target is harder to hit than a sitting one I continued to ride. So she moves over to the other side of the road into the berm and comes to a stop. As I ride by she comes right at me. I hit the brakes and she overshoots me then got back in front of me.

So I continued to ride behind her wondering what her malfunction was. Now according to a friend of mine Estrogen would be the cause and the fact that I am a man would be the effect but I don't really think that is what  was going on here.So she pulls off of the road again on the opposite side and I foolishly go past her. So she comes at me again and forces me off of the road again. At this point I think she had had enough as she went up the road and pulled off on my side, turned around and headed back in my direction at this point she either figured that she had better lay off as she must have figured I had taken her picture. Unfortunately this is the only photo that came out as I was trying not to die.

Unfortunately I did not get her license number, due to the wanting to live thing, and this photo isn't clear enough to read it. So if you know anyone that is a CSI maybe they could clean it up for me so I can complete the police report.

Is still a couple of mouths out and I am already tired of this guy. Hopefull Paul and Phil will get over him long before the race begins.

Something tells me you will see this car again...