Turn into a Century. Was it the missed turn early in the ride (+2)? Was it the desire to go see the groundhog in Punxsutawny (+6). Or the desire not to retrace our previous steps (+4)? Of course then when you reach the point where you are going to have a over 90 miles  anyway, is it foolish not to just go for 100. Again I am not sure but what I am sure of is that everybody had a great time.
This past Saturday 8 riders form AG3r and IUP cycling 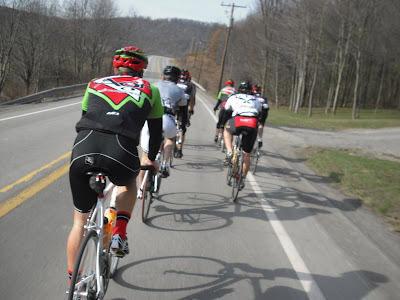 Headed out for what would turn out to be an epic early season ride. Little did we know that we would be doing 100 miles at the onset or that our sense of humor would be needed later in the day. Our original plan was to do a modified Smicksburg loop to give us in the proximity of 80 miles. As fellow cyclist you know that to come up with a ride that will give you the exact mileage you are looking for is hard to do and even harder on the fly. 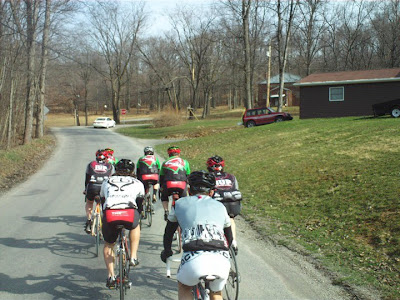 After missing the first turn on the ride due to the fact that the ride leader stopped to lose his knee warmers, we continued on a different route. Nobody seamed to mind as the weather was perfect, the company great, the scenery fabulous and nobody but myself new were we were headed. After some great rolling hills and a nice long section through the valley, we finally ascended to 119 outside of Punxsutawney. 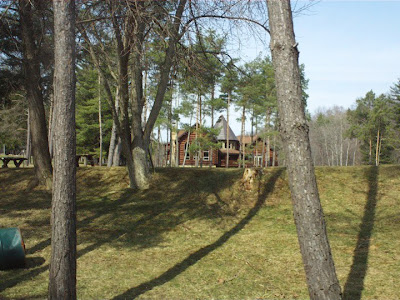 Somebody had a great desire to see Phil and we all needed to refuel, so off we went. 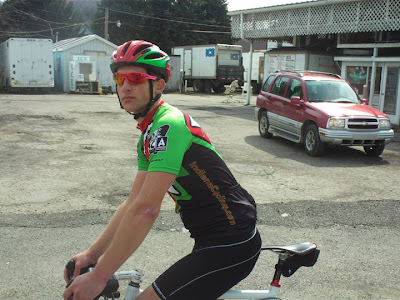 Once we topped off our tanks we headed out the backside of Punxy twoards North Point and along Mahoning Creek.Little did we know that our sens of humor and hip waders would be soon be called upon. We were little more than 5 miles from smicksburg when we encountered this sign. 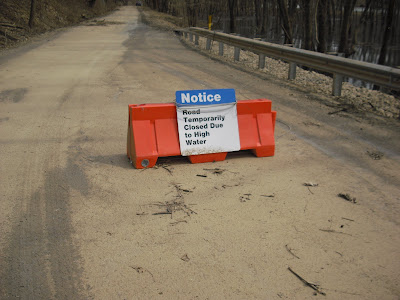 Undaunted by a meer warning we continued on only to find that our road ride had would soon become a cyclocross ride. So we pressed on through the muck and debris until we came to this. 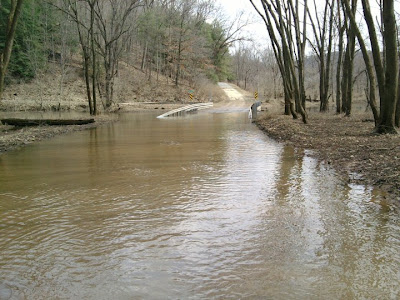 Had I known what was going to happen next I would have had my camera ready. Actually a video would have been better. Steve tried to ride through the water and was doing well until he headed toward eh edge and ended up in water up to his handlebars.He then attempted to get off his bike and got stuck in his pedal. Words do not do this entire situation justice. That's Steve in th background trying to get unclipped. 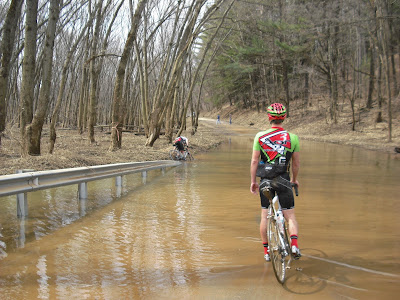 So after wading through the water we carried on through smicksburg and back to Indiana. 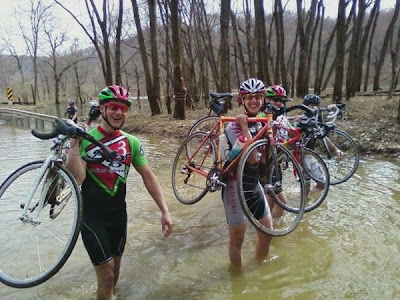 Not a whole lot happened on the way home. Some good conversation and a final stop for fluids about 9 miles from town. This was also some of the riders first century and at lest ones first + 50 ride.
Another Rant By Affib Rider at 6:57 PM

Looks like fun! Although, I am sure that water was FAR from "fresh"! Better wash your stuff on "Sanitary" setting :)

I learned a valuable lesson once, which was that "if you can't see the bottom, you're going to get your feet wet".

The corollary was "If there are birds floating on it, you might not want to ride it".