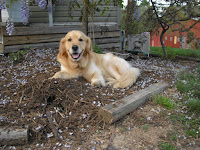 We had to let our Male Golden go today. It is never easy losing a pet especially when they are so special to you and there is no doubt Goliath was my dog. When he was a pup he used to go to work with me every day. As time passed so did my career path so instead of going to work with me he greeted me at the door every day with a shoe and hos golden smile.

Not only was Goliath a great companion but he brought so many wonderful people into our lives through his and Lucy's puppies over the years.Goliath was a gentle sole that loved everyone and was by far the most obedient dog I have ever owned.

Goodbye old friend you will be sorely missed. Goliath The Timid One

Well its been 30 days now since my ablation and things have been going pretty well. The only hick-up was a couple weeks ago (day 14). I started having some weird heartbeats. I don't think it was affib gut it might have been. This of course is normal following an ablation and making it 14 days in NSR is a good thing IMHO. I only made it 3 days following my first ablation.

What was odd though was that I went out of rhythm at the same time of day. The third time was earlier in the day and took a little longer to covert 2 of 3 times and converted using flecanide in about 5 hours. The third time took a little longer. All episodes were separated by a few days. So I talked to my EP and he put me back on the daily regiment of flecanide 100mg twice a day. I've been in NSR ever since. Again this does not worry me or make me think that my ablation was not successful. As the heart heals this is normal and can last for up to 3 months.

Another Rant By Affib Rider at 2:13 PM