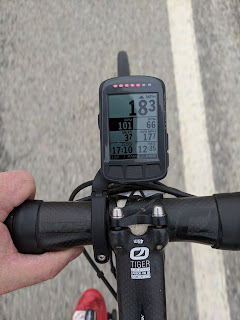 Got home from the hospital on Saturday afternoon and headed straight for the bike and a nice easy 20 mile ride. What a positive affect getting out in the fresh air doing something you enjoy has on your perspective. I made sure to keep my heart rate at a manageable level and just enjoy the moment.

I did the same thing on Sunday. The weather was not nearly as nice being about 20 degrees cooler but all in all a nice ride. Up until the point my heart went into affib again. It appears that my heart has gone back to its old ways by triggering the affib at low resting heart rates and recovering heart rates.

I went in to affib about 2 miles from the house. All I had left in the ride was a nice easy down hill then a decent climb before another flat stretch to home.I was just starting the downhill watching my heart rate. When my rate reduced to 85 bpm it converted to affib and shot up to 199 bpm. it then fluctuated between 199 and 100 for a while then settled in at around 150 bpm.

My heart converted back to NSR yesterday morning but went back out again just a short while ago. So we will see how long it takes me to convert back to NSR again.

Spoke with my Doctor yesterday afternoon. He called to follow up with me on my hospital stay and also my recent affib episodes. He let me know that he had spoken to his associate and that he was totally fine with me seeking out a second opinion. We had a really nice conversation and he offered up his assistance in any way he could to help me find a solution. He thought that my choice of surgeons I had chosen was top notch and referred to him as a Guru.

I actually spoke with that doctors office today and the process for seeing him is underway. They already received some of my medical records and the rest are in process for them to receive. So hopefully that will all work out and I will be going to see him. I will write more about that ast the situation progresses.
Another Rant By Affib Rider at 5:57 PM