Did the 3 man loop this evening with Sean, Matt, Andy, and Duane. Now the 3 man loop, is very interesting for the simple fact that no matter how many people start the ride, weather it be four, five six eight, it really does not matter the way the group finishes up is with at least one group of three by themselves. What is strange about this particular loop is that it is not terribly hard. not too much elevation gain and is right around 35 miles so it isn't super long.
We started the ride as usual and just about 2 blocks out from the shop I realized that I had forgotten my water bottles. So i told the guys just to soft pedal and I would catch up (now our 5 are 4). So I return to the shop, grab my bottles and head out, just outside of town, right before the climb I encounter Andy (2 + 3 you can see where this is headed. So I blow past Andy, and my heart is ruining on all 8 cylinders this evening and I am felling strong. So up the climb on Fulton run and down the other side. I did soft pedal to let Andy latch on, and the chase was on. It wasn't too long before we had the other guys in site. We finally caught them and throughout the whole ride it was a real struggle to keep the group together. but we did finally finish with all 5 of us together. that is absolutely the first time that has ever happened.

I felt really Strong this evening and only had my heart jump once during one of the times I was bridging Andy and Sean back to the other 2 guys that had gaped us. Andy has not been himself lately either. He also has some sort of heart issue as well. We really should get a cardiologist to ride with us. Tonight's ride included 2 guys with heart conditions and one diabetic.

So we return to the shop and Sean was hanging out letting his sugar balance so we decided to test mine as well. Now I'm no pro at this diabetic thing so after 3 tries I was able to finally draw enough blood for Sean to get a Reading on his glucometer. My blood sugar was at 87 which I took as meaning that I had a good hard ride. Low blood sugar and ringing ears...nothing like it. 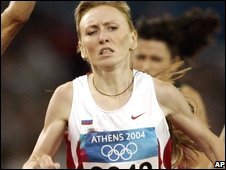 the Olympics are just around the corner and there is already a doping scandal. At least its not only in cycling...as if we didn't already know that, right? The list is long and well known most just refuse to believe it.

That's right folks...fitness in a bottle is just around the corner. N

o more exercising just take 2 pills and race me in the morning. The Journal Cell reports that US researchers have 2 possible pills that appear to grow muscle, increase stamina, even burn fat and in tests, 44% of mice were able to run further-suggesting that humans without prior training would be able to do the same. SIGN ME UP....I'm tired of all this suffering. Of course this is all controversial for fears that they would be used in sports.....DUH.
Another Rant By Anonymous at 9:51 PM