Well it has been quite some time since my hands have been greasy but they were definitely dirty today. Steve brought over Hannah's bike for me to swap the comps to his new/old TCR alliance frame. this should be a nice upgrade for here. She has been riding an OCR2 for about a year now and doing quite well with it.
Steve is all a twitter over his new ride, a 09 Specialized Tarmac frame that he put his other parts on. He really likes the way that it rides, nothing quite like carbon. 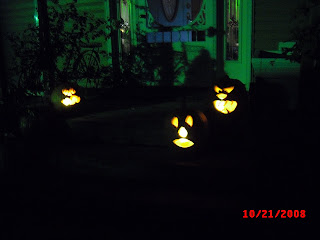 My son and I carved pumpkins the other evening. He drew the faces and I cut them out. he did a pretty good job for a little guy. He still wont touch the pumpkin gut though.I did however sneak up on him and dump a handful down his shirt. He nor his mother failed to see the humor in that, as usual, but did find humor in him doing it to me. That made things all better.

Did you happen to catch Obamas 30 minute, I'm the greatest thing to happen to government infomercial last evening. I hope that the public realizes that it was just that, a commercial, not necessarily reality TV if you get my drift. Shoot, after watching that I was almost ready to vote for him.Unfortunately though the general public is much like my son. If it on a TV commercial it must be true. Grab onto your wallets folks...its going to be a bumpy ride.
Another Rant By Affib Rider at 4:54 PM