Two weekends ago two friends and myself participated in the TOSRV (Tour Of The Sciota River Valley). 2 days of riding between Columbus and Portsmouth Ohio, which covers 105 miles each day. We had a really good time and road hard the whole time averaging 20mph for both days.

The ride is very well supported with food stops every 25-30 miles, loaded with the perfect mix of food. Of course when planning or participating in such an event as this, you must be prepared for any type of situation or weather. Also, being that there is no SAG support provided, except for emergency situations, you must also be physically and mentally prepared for said weather or situations.

Day one was near perfect weather ranging form the mid 60's to 70's with a slight breeze. We headed out of Columbus setting a moderate pace, gradually ramping it up as we went along. The three of us pretty much kept to our little group with the occasional person catching our wheels along the way.We rolled into Portsmouth @ around 1:30.

Day two brought the challenge of rain. It started sometime during the late night as I remember being awakened by the rain tapping on our tent. We awoke Saturday morning to 62 degrees and a steady rain. Fortunately there was a dry place to get dressed and we had covered our bicycle seats the night before so we were able to at least start out the first few minutes of the ride dry. I know, what good was covering the seats, when we were going to be in the rain all day. I dont know, but there is just something pleasing to the psyche to start out in dry clothes and a dry seat.

We finished up the day at just about the same time on Saturday,except for the fact that we spent far lest time socializing @ the food stops. With temperatures hovering at around 62 with rain, it does not take long for the cold to creep in and weekend your spirit.

What does any of this have to do with me not racing anymore?

When participation in events such as this, especially one that has been going on for over 50 years, you encounter a very diverse group of cyclists. Young, old, fit, not so fit, racers and people training for longer trips. I actually road the entire ride with a RAAM finisher and road a portion of the second day with another. So after leaving the 50 mile stop, we just started out easy. This was also lunch so we set a digestive pace and slowly ramped things back up. @ about 5 or so we had come up onto a fairly large group of riders and were just starting to work our way through them as another group of racer types approached from behind.

This was surely a testerone laden group, as they were hell ben on getting by and through this other group at any cost. Weather cars were approaching or not. during this particular waylay, a couple of them had to dart out of the way of oncoming traffic and cut me off. So at this point it occurred to me it might be fun to chase and see what kind of fun we may have. This is also a point in the course where there are many rolling hills, which played to our advantage, as being form SWPA hills are a major part of any outing.

So we took of quickly catching and passing many of these riders by the top of the first climb. We soon caught the rest and passed them before the top of the second climb. It became readily apparent that we could easily allow them to stay with or slightly ahead of us then quickly overtake them on the hills.This little reindeer game went on for quite a while until things leveled off and we all just started riding together until we came to a place where we had to yeald for traffic before we could carry on.

This is the point where my heart decided that it did not want to play anymore. Ever since my ablation I have been able to ride as hard as I want so long as I keep the pace steady and my heart-rate consistent. However when racing or riding such as we just has been your heart-rate can be all over the place. In my case, during this 30 or so minute interval, it had been from 160 to 188 and everywhere in between. Which may have been ok if we had not had to come to a complete stop immediately following.

The recovery period after hard efforts was always a trigger for my AFFib in the past, and even since my ablation can occasionally still set my heart atwitter so to speak. So I soft pedaled the next couple of miles to the next food stop and allowed my heart to settle down., Which it did after a fairly short period of time. I did however take my PIP just to make sure things stayed that way. 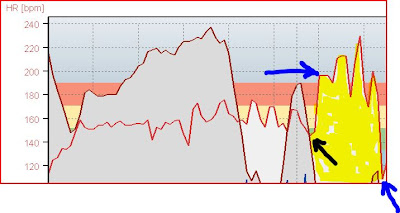 (The arrowed portion shows my HR OOC)
Notice the jump from below 160 to near and over 200 then back to below 120 when I converted.

That all being said I still love to push myself on the bike. And maybe someday I will start doing time trials, as they require more of a steady effort. At this point I am very pleased with the results of my ablation, though I believe that I will one day have to go back for a touch up procedure.To either eliminate what ever it is that has either reconnected, or that they missed during the first procedure.

Shutting off like that will drive anyone's system into a mess. Glad you were able to come back on line so quick. TOSRV is a nice FLAT ride...that ended for "me" when my daughter was born...since it always occurs on Mother's Day Weekend. GHow did YOU get out?!!!