Not really, or in the sense of this new found anomaly that has somehow found its way into our current society. So for the 1 or 2 of you that read this blog anyway or by some mishap of misfortune get linked here by some search engine that was intrigued by my tags. Have no fear I promise its safe to continue.

Anyway, as stated in my previous blog I received the LIFEWATCH monitor my doctor ordered yesterday to monitor for any anomalies that may still be lingering from my ablation in January. My next appointment is a little over a month away and this is the best way to see how the heart is doing.

So I activated and put the monitor on at around 1pm yesterday and had my first recordable event at around 6pm. So far as I know this is the first event I have had since going back on the Flecanide and Metoprolol regiment since back in mid January following my procedures. I'm not sure what the rhythm was but it did not feel like affib.

Like I said I made a recording and sent it. The monitor supposedly does this on its own but it also has the option for me to record events I know are happening. The LIFEWATCH people did call me afterwords and make sure I was feeling OK. They also said they would be sending copies of the recordings to my doctor.

So, is this a major setback? I don't know. I'm still within the 3 month blanking period. This is the first event I know of since January 17th. It can take six months for symptoms like this to totally disappear. I have been exercising without any issues. I guess only time will tell and I remain optimistic. 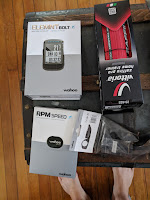 I haven't ridden with a bike computer for quite a few years now. I have been keeping track but just using my phones GPS and STRAVA. So I'm still collecting information but don't see it until the end of the ride. A couple of the guys I ride with complain because instead of keeping a certain pace I just ride how I feel at any given point of the ride. So maybe this will put an end to his complaining while giving me more information to assist in my training.

The computer I ended up getting is the  WAHOO ELEMENT BOLT. I was also considering  the GARMIN Edge 520. Both computers are very similar, and I think GARMIN actually makes both computers. I read a bunch of reviews and watched some videos and came to the conclusion that the WAHOO was the best choice. Not to say GARMIN does not make a great product its just the bolt seams to be more technologically advanced. Also if you are looking for some good in depth cycling equipment reviews you should check out these two guy's. DC Rainmaker and Steve over at In The Know Cycling.  Both of these guys cover all the bases in their reviews.

I'll keep you up to date on the BOLT as i get into using it.
Another Rant By Affib Rider at 2:37 PM