We Will Monitor Your Every Move 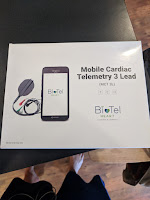 So I received a care package today from my Doctors office. Hooray its one of the final steps in seeing how successful my ablation was. I wore a similar type of monitor back in 2010 several months after my ablation back then.

The monitor constantly records my heart activity and sends it via cell phone to a central recording station. If I am to have an issue it will alarm to notify both myself and my doctor. On the up side I can still wear my WAHOO TiCKER HRM with it so I can monitor my rates while exercising.

I often wonder what the recordings looked like last time around as I was instructing spin classes at the time and doing a good bit of riding because the weather was so nice.

Really...... We Are Monitoring You

So FACEBOOK is in the news again for privacy infringement. I'm pretty sure the only reason this is happening is due to the current buzz about the trump campaign purchasing data from a third party source during the last election cycle. Otherwise we would probably not be hearing about it. This only further entrenches my opinion that the left will go to any extreme to undermine our current president. Even to turn on their own if necessary.

Al Frankin was the first victim of this particular strategy now Mark Zckerberg.  What is really telling about the situation with Zuckerberg is the fact that it was the Democratic Party, The O'Bama Campaign in particular, that perfected this strategy.  So I feel it is safe to assume that during the same election cycle the Democrats were using the same strategy but have somehow not found their way into the news for doing it. I'm not saying this isn't news worthy. I'm saying if your going to cover a story cover the whole story not just the parts that you agree with or think will further a particular agenda or narrative.

Of course if you didn't already know that FACEBOOK, GOOGLE and any other Internet savvy company isn't collecting and selling data on you your a fool. This is why I like many others don't use their full names or use and alias for FACEBOOK Identity. Not this this really stops it but it will curb it and at the very least keep the average Joe or potential employer form immediately identifying you on social media.

Not that we all have anything to hide, However, in industries I have been involved in I had to work with people and companies that I know for a fact that I was diametrically opposed with both politically and in some cases morally, and didn't care to be judged on that basis as I know many of these institutions and companies would.

It really isn't. It has allowed me to reconnect with old friends and to stay in contact with old. I'll admit I'm not a FACEBOOK hero having thousands of followers and friends. I'm a big believer in quality not quantity and live by the mantra "Be the best friend you can be, someone may be counting on it." In other words, don't pick your friends based on their financial stature or popularity because those criteria will surely let you down.

To that point back in January when I was sitting in the hospital waiting to see if I was going to be able to have my surgery I get a cryptic messenger text from a friend. "Do you still hate me?" the text read. "How could I ever hate you", I responded. Which lead to a great conversation which included the uncertainties and fears people have with situations like the one I had currently found myself in and how we personally dealt with them. Which I topped of following my surgery with, "I'm still alive so we will continue to be friends". She found this particular statement amusing.

This particular friend was a girl I dated back in high school and Quite frankly I cant really remember how long we dated or why we stopped,  but I really did like her and we had allot of fun together and that is the part I do remember. She was spunky and outspoken and I really liked those traits in a person and still do to this day.

I'm not completely sure where her question stemmed from, but I wont over think it or inquire as to the particulars beyond the conversation we had that day. I'm content in the fact that we remain friends today.
Another Rant By Affib Rider at 2:58 PM